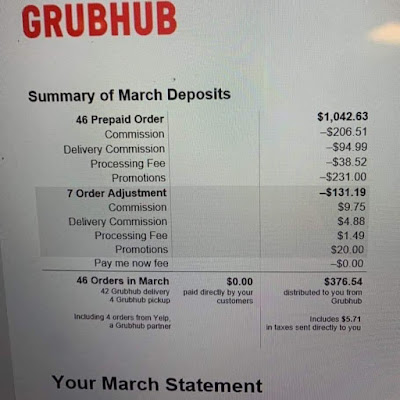 May 1, 2020
A restaurant consultant posted a client’s March statement from 3rd party delivery company, GrubHub, revealing the startling reality of a restaurant receiving only 36% of his total sales. This has sparked an online debate and the consensus is clear, we should limit our use of apps like Grubhub, Postmates, UberEATS, etc., and patronize eateries directly if we truly want to support the already-struggling restaurant industry.

“Stop believing you are supporting your community by ordering from a 3rd party delivery company,” wrote Giuseppe Badalamenti, a consultant and owner of Illinois’ Chicago Pizza Boss who was the focus of a Newsweek article published today. “Out of almost $1,100 of orders. Your Restaurant [sic] you are trying to support receives not even $400. It is almost enough to pay for the food.”
My name is Henry, and I am a deliveryaholic. In the time before corona (B.C.), I would use 3rd party delivery apps numerous times per week. I believed I was doing a good thing supporting local restaurants, while enjoying delicious food conveniently brought right to my apartment from all over the city. I thought the fees charged to me on the bottom line was all the delivery app businesses were taking as profit. I was ignorant to the truth of how these companies operate.

A recently published article by Business Insider dove into the realities of the 3rd-party food delivery platform business. It was revealed that although these delivery platforms claim to be allies of the hospitality industry, most charge restaurants as much as 30% per order as commission and some are being accused of not paying eateries for delivered food in a timely fashion. Now that dine-in is no longer permitted throughout most of the country, many more people are using third-party food delivery services like Uber Eats, DoorDash (it should be noted this company slashed fees for restaurants by 50% through the end of May), GrubHub, Postmates, Seamless, and others.

“It’s hard as an operator to not be tempted to sign up,” said Han Tran, the proprietor of San Diego restaurants, Ebisu Sushi in Hillcrest and Shank & Bone in North Park. “Their reps are constantly hounding us via phone, email, and social media messaging. And diners are always asking for it often not aware of the cost and risk on our end. I 100% understand the demand and convenience for delivery. I’ve used it myself. It’s important that consumers are more aware of the business dynamics and hopefully this will bring that to light.”

In the B.C. time, orders through these companies may have only been a small portion of a restaurant’s overall sales, but they have drastically increased as forced stay-at-home mandates continue. This has given such companies more power as restaurateurs find them a necessary evil in a struggle to survive. According to The Guardian, Grubhub alone has reportedly received up to 15 times the usual number of memberships, while at the same time resorting to what some think are unscrupulous practices.

“Grubhub in particular has come under fire recently for its ‘Supper for Support” promotion, which offers discounts to customers in the purported interest of supporting restaurants,” wrote author Irene Jiang. “However, in order for a restaurant to participate in the promotion, it must first sign a contract stating the restaurant will pay the total cost for the discount, and pay Grubhub a pre-discount processing fee for orders. Grubhub has also asked its customers to oppose an order by San Francisco Mayor London Breed that mandates delivery services to slash their fees in half.”

Some cities, like San Francisco and Seattle with New York City and Los Angeles on track to follow suit, are limiting what these services can charge in an attempt to protect the struggling restaurant industry from being gouged by exorbitant fees. The restaurant industry is one of the county’s business sectors most negatively affected by precautionary measures put in place to battle the COVID-19 pandemic. Industry experts like Top Chef judge and New York City-based restaurateur Tom Colicchio warn that 75% of independent restaurants in the U.S. may not reopen without more assistance.

“It’s a lot more difficult than saying, ‘Let’s hunker down for a month and a half, and then we open and everything is fine,’ said Colicchio in an article published by the New York Times. “This is going to take a year. The world just changed. The enormity of the problem here is so big people can’t wrap their heads around it.”
Some San Diego restaurants have chosen not to use 3rd-party delivery apps during this time, not for economic reasons, but for fear of employees and customer safety. Restaurateurs have expressed concern over contact with delivery drivers who are not regulated by Health Departments like restaurant employees, as well issues with how their food is being handled.
“For the well-being of our staff and guests, we will be offering delivery exclusively from our website (link in bio) until further notice,” wrote Brian Douglass, co-owner of Common Stock restaurant in Hillcrest, which has been donating meals to out of work restaurant industry members since the beginning of the stay-at-home orders. “Third-party services have been unable to keep up with the rapidly changing safety measures necessary to keep our beloved staff and patrons safe. Order directly from us and you can rest assured that your driver will be wearing a mask, sanitizing relentlessly, and adhering to all current CDC recommendations.”

Anderson also asked GrubHub to remove them from being listed on their platform. They did not, but they did change the status of Common Stock’s listing to “Closed” when viewing the hours of operation. Common Stock remains open 11:30am to 8:30pm daily (9pm on Saturday nights). Their food is awesome and they’re doing great stuff for the community. Support them.

Common Stock is one of many restaurant owners who have been put on delivery apps and websites without the owner’s permission. A Fox Business article from January 2020 B.C. revealed that some delivery apps were putting restaurants on its apps and websites without an owner’s permission by accepting orders from customers and placing them on their behalf by calling the restaurant or sending a driver to place one in person. Numerous lawsuits against these companies have been filed.

“We’ve been getting a ton of orders through our third-party delivery services, however they all take 30%,” said Emily Green Lake, the owner of Sisters Pizza in San Diego’s Hillcrest. “Our philosophy is ‘we are getting 70% of sales we wouldn’t have without them’, but if guests transition to picking up or allowing the restaurant to deliver, we would be much better off. Furthermore the logistics with third party deliveries are often off. We’ll let the delivery app know there is a 30 minute wait for pizza and the driver shows up in 10 and is upset when the order isn’t ready. Some drivers have left and the app takes a while to reassign a driver, and consequently the food isn’t delivered in a timely manner and it makes my business look bad. I’d love a better system however we are not in a position to hire a delivery driver so we’re stuck between a rock and a hard place.”

So should we delete delivery apps entirely? That is not exactly what I’m advocating, rather my goal is to inform people so they are aware on how these companies operate and limit the use of them whenever possible. Believe me, I understand the appeal of convenience, but in such an unprecedented time when so many businesses are struggling, maybe we can resort to patronizing restaurants directly. Myself, upon learning about the inner working of the business model and how restaurants are being charged, I have chosen to no longer use these delivery apps.

“Order directly from restaurants,” commented Edwin Real, founder of popular local Facebook Group Eating and Drinking in San Diego. “They get all the money and tips. There are also less hands touching the food. Also, the people touching it at restaurants are highly regulated by the Health Department, unlike 3rd party delivery drivers. Picking up is also pretty easy at most places. They’re doing curbside and limited contact food. Picking up food gives you a reason to get out, get steps, get some fresh air. It also gives you a chance to see some of your favorite people!”
There are also San Diego-based delivery app options, like the recently launched TakeIn, a company that delivers local food with no cost to the restaurants. Many area restaurants have also resorted to delivering their own food to limited areas, including Pizza e Birra (get The Henry sandwich, named after yours truly), Common Stock, Social Tap, Beaumont’s, Ambrogio15, Tribute Pizza, SD Taproom,  Monzu Fresh Pasta, and others.